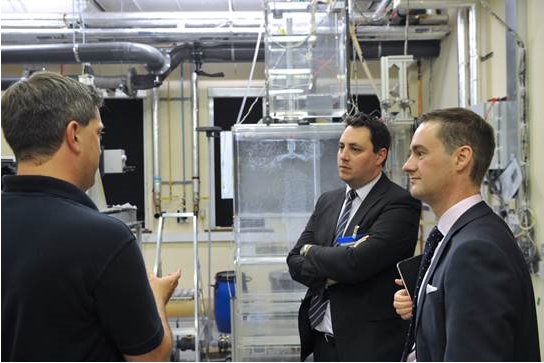 A joint bid, led by the Tees Valley Mayor, Combined Authority and the Materials Processing Institute, is part of a £14million national programme which will deliver five new hydrogen refuelling stations, 73 fuel cell passenger vehicles and 33 fuel cell buses across the UK.

Tees Valley Mayor Ben Houchen welcomed the result of a Government competition that will see two refuelling stations built in Middlesbrough and Redcar, plus a fleet of cars which use hydrogen technology for long-range travel (300+ miles) and fast refuelling capability.

The new refuelling stations could allow cars, buses, bin lorries and even trains to be powered by the super fuel.

Tees Valley produces more than half of the UK’s hydrogen – a resource that is currently stored in caverns before being transported out of the region to other areas across the country. Hydrogen is used daily by many large-scale industries in the production of petrol, chemicals, food and electronics.

Combined with renewable electricity, hydrogen can be produced, stored and used to generate heat and electricity without producing any greenhouse gases or air pollutants.

Figures from a draft report commissioned by the Combined Authority and produced by KPMG suggest that exploiting the opportunities of the hydrogen economy could add up to £7billion to the region’s economy by 2050, with the creation of as many as 1,000 jobs.

“The fact that two of the five refuelling stations announced will be in Teesside is a clear vote of confidence in our region’s industry, skills and supply chain.

“We already produce 50 per cent of the UK’s hydrogen, so properly utilising it will allow us to keep manufacturing jobs in the Tees Valley and build on the global drive to cut carbon emissions, rather than be held back by it.

“Hydrogen is vital to our green economy plans and it doesn’t stop at cars – we are currently progressing a pilot of the UK’s first hydrogen train in the area.

“This once again demonstrates that Government sees our region as key for their drive to a greener economy and strengthens our case for further funding to become the clean growth capital of the UK.

“We have huge plans for other green energy projects, such as the new multi-billion pound Clean Gas Project. Once developed, it will be the first gas-powered energy plant in the world to deploy full-chain Carbon Capture Utilisation and Storage (CCUS) technology.”

“This announcement is welcome news for Tees Valley, and we are delighted to have been involved throughout the bid, which will help to deliver pioneering technology in the region. The UK’s clean growth agenda is of vital importance and the hydrogen economy has massive potential.

“The successful outcome of our bid, alongside the Tees Valley Combined Authority, is a good starting point for capitalising on our region’s industry expertise and experience, and unlocking significant economic benefits and gains for Tees Valley and is a key step in the Institute’s strategy to decarbonise industry and transport through developing and supporting the commercialisation of ground-breaking green technologies.”

“The government wants all new cars and vans to be effectively zero emission by 2040 and getting the right infrastructure and investment in place is key.

“Record levels of electric vehicle registrations, along with the innovation being generated by our world class research base, clearly show the UK is on track in the transition to greener transport.”

The announcement also comes just weeks after Tees Valley was named as one of the areas that could benefit from £170million of funding to create a carbon “net-zero” hub of heavy industry by 2040.

Energy and Clean Growth Minister Claire Perry MP launched the mission to create the cluster at the COP24 climate talks in Poland, with Tees Valley set to present its case for being the first “net-zero” cluster.