Youth apprentice picks up a special recognition at NEPIC awards

Hannah Kay knows only too well that life can be tough. As a former young carer, the 20-year-old from Middlesbrough has faced more than her fair share of struggles. But despite it all, she doesn’t consider herself as any different to anyone else.

That is why she was left stunned when her tutor at Redcar & Cleveland College suggested she put herself forward for a North-east apprentice of the year award, and even more surprised to go on to receive a special recognition accolade for her courage, strength and determination.

Currently working on an apprentice on a youth work programme at The Junction Foundation in Redcar, Hannah said:

“I don’t feel I have done anything to warrant an award. For me this is just the way that my life has panned out. I haven’t done anything amazing, I have just lived my life.”

For many years Hannah cared for her mum as she suffered with acute mobility issues due to suffering muscle wastage at the base of her spine – it was during that time she was first introduced to The Junction Foundation, a charity that works to make a difference to the lives of young people.

Then, when Hannah was 16, her mum was diagnosed with cervical cancer. A two-year battle followed, with gruelling courses of chemotherapy and radiotherapy, but despite twice thinking her mum had overcome the odds, the cancer returned for a third time and she passed away in December 2016.

“It hasn’t been easy and I have struggled with my own mental and physical health,” said Hannah.

But today, after getting back in touch with The Junction Foundation, she feels she has been able to use her own experiences to help other young people.

Initially doing some volunteer work with the charity, when an apprenticeship opportunity came up the team encouraged Hannah to apply.

Going on to get the job, she admits, at the time her heart wasn’t fully in it. Still struggling with her grief, she found the demands of working life a challenge, while being dyslexic made the written work demanding.

But as time went on, with the support of her tutor, Stacey Ward, at Redcar & Cleveland College and the team at the charity, she said:

“Seeing the units signed off and being told it was of a high standard gave me the confidence to think I can do this and my whole perspective changed.”

Now ahead of her targets, taking on extra responsibilities at work, and planning and leading sessions for young people, Hannah said:

“I didn’t used to have any aspirations as such, now I want to build my knowledge and skills and stay in the youth work sector.

Enjoying being able to reach out to young people, she said:

“My experiences give me an inside knowledge which helps. I can empathise a lot more because of what I have been through.”

Nominated for the Apprentice of the Year Award at the Annual NEPIC Industry Awards, the judging panel were so touched by Hannah’s story that, despite it falling outside of the sector, they felt she deserved special recognition.

“When we received this year’s applications we realised that Hannah’s apprenticeship is outside our sector but her story is so inspirational that we had no hesitation in recognising her achievements through a special recognition award.

“With the tremendous support of Redcar & Cleveland College and The Junction Foundation, Hannah has overcome many personal difficulties and is now making a real success of her apprenticeship. She is an outstanding example of how apprenticeship schemes can provide huge opportunities for young people, whichever sector they may be in, and she should feel extremely proud of her achievements.”

“I am so proud of Hannah, she has overcome many difficulties and totally altered her way of thinking and her attitude to life in general as well as her career. She has grown in confidence and has worked extremely hard, she has drive and commitment for the first time and really is starting to see herself as valuable.”

“Hannah truly deserves the recognition she has received. She is a role model to other young people who have experienced challenging circumstances. With the right support and encouragement, as well as a changing vision of what she wanted her working life to be, Hannah has really stepped up. She is now confident in her delivery to young people, forms a key part in an effective youth work team and takes on extra responsibilities.” 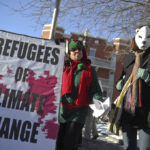