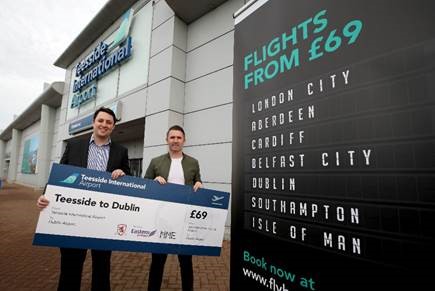 Middlesbrough FC’s Jonathan Woodgate and Robbie Keane have today (7 February) kicked off ticket sales of new flights from Teesside International, as an exciting new partnership between the club and airport begins.

Flybe’s new flights, operated by franchise partner Eastern Airways, include the first in a decade to Robbie’s home city of Dublin, in time for St Patrick’s Day.

The routes also include flights to London City Airport, connecting Tees Valley to the capital by air for the first time in 11 years, plus daily direct connections to Belfast City Airport, Cardiff and Southampton.

From May 30 this year, passengers will also be able to fly to the Isle of Man on a seasonal service and the airline is also reviewing its flights to Aberdeen to increase reliability of the fleet.

“I am delighted to announce that tickets are now on sale.

Teesside, Darlington and Hartlepool is once again connected to all four corners of the UK as well as Ireland and with these amazing prices I’m sure the new flights will be hugely popular with local people and business.

“Strengthening our partnership with Middlesbrough FC gives us even more of an opportunity to work together to promote the new routes we’ve secured at our airport.

“I am looking forward to working with both Boro and the airline on some brilliant promotions, which could include flight giveaway competitions on selected match days or special offers to Boro fans from our airline partners.”

“We are proud to be expanding our network from Teesside to popular destinations such as Belfast City, Dublin and London City, which echoes the importance of delivering regional connectivity.

With fares now on sale at flybe.com from as little as £69, it proves that we are committed to delivering a cost effective, speedy and efficient service to both business and leisure passengers of Tees Valley.

The airport’s partnership with Middlesbrough will provide us with a perfect platform from which to engage with the community.”

The routes, which include 37 new flights per week, will add 185,000 seats each year, more than doubling the number of available seats.

Middlesbrough FC’s renewed commitment to Teesside International includes a new partnership to promote the airport at games and to fans and supporters across the world via social media channels as well as the scope to develop special offers and tie-in deals.

“We already have close links with Teesside International Airport as the team regularly uses it for our away travel.

Strengthening our partnership will provide an opportunity for our fantastic fan base to learn more about the growing number of flights and destinations on offer.

Our fans are some of the most passionate and loyal in the country, and getting them behind our airport will really help make it the success we know it can be.”

“We believe that there is a tremendous opportunity for growth at Teesside International Airport, serving both the outbound business market and supporting the inbound visitor economy.”