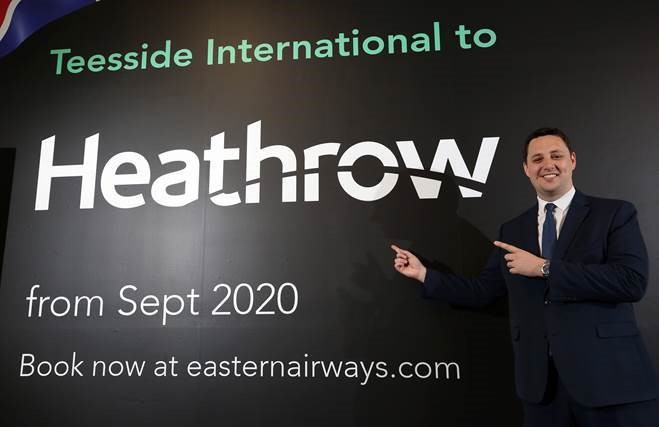 Teesside International Airport is once again connected to one of the world’s best airports after Tees Valley Mayor Ben Houchen revealed a new daily connection to Heathrow – its first flights to the UK’s biggest airport in more than a decade.

The announcement of Eastern Airways’ new service to the London airport, which is one of the busiest in the world, serving more than 80million people a year, was made by Mayor Houchen at an event at Teesside Airport and comes just 18 months after he secured a landmark deal to save the airport from closure.

The new Heathrow route means that local people in Tees Valley will be better connected to the capital than ever before, allowing them to fly into London for business or to connect with more than 180 locations in 84 countries across the world.

Tickets are on sale now for the service, which is set to begin on Monday, 14 September. Tickets start at just £54.99, which includes all taxes and fees, and baggage allowance of 15kg.

“Since I did a deal to take back control of our airport last year to save it from closure, we’ve announced some brilliant new daily and seasonal routes.

“But whenever I’ve revealed a new service people have said, ‘That’s great, but what about a connection to Heathrow?’ Well, I can now say we have flights to one of our most-requested destinations, and it starts next month. Whether people from Teesside, Darlington and Hartlepool are looking to travel for business or pleasure, they now have a range of options for getting to London.

“This is another massive vote of confidence in our airport and I’d like to thank Heathrow and Eastern Airways for working with us to realise a key route for any serious airport.

“Our airport is much more than just flights though; it is hugely important to our local economy and it is playing a key part in my plan for jobs.

“I’ve always said that investment won’t come on a bus, it will come through our airport terminal which in turn will create good quality local jobs for local workers.”

The news comes just two days after the first flight between Teesside International Airport and Amsterdam Schiphol took off since the airport’s reopening following the coronavirus pandemic.

The flights to the Dutch capital, operated by KLM Royal Dutch Airlines, has begun as a single daily service connecting Teesside with more than 100 destinations, and will return to three-times daily when market conditions allow.

Last week, Teesside International announced Eastern Airways’ route to Cornwall Airport Newquay will now run all year round, and that flights to Dublin and Southampton are set to take to the skies in September with tickets available now starting at £79.99.

These flights will give local people even better access to the South West coast, famed for its beaches and surf as well as the Republic of Ireland’s capital, a top citybreak destination, and Southampton which serves the popular cruise market.

“As the UK’s Regional Airline, the opportunity for Eastern Airways to connect Teesside to London Heathrow, the UK’s primary hub for worldwide connections is significant in the regions’ economic prosperity and economic recovery.

“Offering an initial daily e-Jet operated service helps add further London capacity and makes reaching the capital or getting to the North East a little over an hour away, with the array of connections world-wide this opens up.

“We look forward with our partners at Teesside International Airport and London Heathrow Airport to restoring such a major air-link missing for over a decade.”

“We are delighted that Eastern Airways will launch a new connection between Teesside and Heathrow for the first time in over a decade.

“Adding the UK’s hub airport to Teesside’s network demonstrates the growth ambitions of the Tees Valley region, and will provide a vital levelling-up boost – unlocking a huge amount of potential for the region as we build the UK’s economic recovery.

“Heathrow is committed to strengthening our regional connections across the UK with our discount on domestic routes, and we believe this new service will be a springboard for the great businesses in the region to reach out to the world. We’re looking forward to welcoming the first passengers in September.”

In line with Government guidance and for the wellbeing and safety of staff and passengers, Teesside International Airport is currently only open to those planning to travel and airport staff.

New health and safety measures have also been put in place for the airport, with six simple steps including hand sanitisation points and face masks now in operation.

Flight information and more details on safety measures can be found here. 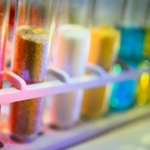 Chemicals industry: prepare for after the transition period