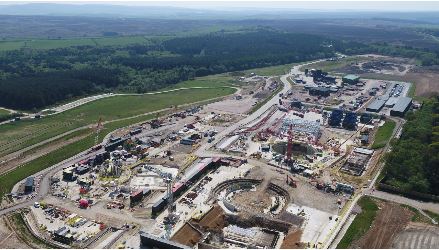 Sirius Minerals’ fertilizer mining project in North Yorkshire and Teesside has had a clear, positive and significant local impact during its first full year of construction, according to an independent study released today.

The economic impact report, by leading consultants Quod, sets out the main impacts of the multi-billion pound project – to mine and export a vast resource of natural fertilizer called polyhalite.  It finds that Sirius and its contractors have already employed 900 people in high-paying, highly productive roles across the project sites – including 66% from the local area – and supported a further 245 indirect jobs.

And it says that the project is already playing a key role in transforming the local and national economies, having invested £355 million into the UK in 2018 and generated £199 million within the economy of Yorkshire and the North East alone.

“As well as the substantial export-led growth and hundreds of millions of pounds in tax revenue that we will achieve in the future, this report demonstrates that we are already making a tremendous difference to the local area.  We are delivering on our promise to boost the regional economy and make sure local people feel the benefits.”

The report also highlights the community payments and schemes the company has made, covering employment, community and environmental initiatives, as well as skills development and training programmes.  The company paid £340,000 to local councils for education and employment initiatives last year, conducted dozens of education outreach events with schools and recently launched a programme for 50 apprentices – the first cohort is due to start in the autumn.

Delivering an assessment of the project, the Quod report states:

“Sirius has made a demonstrable commitment to the local, regional and national economies… put staff time and investment into capturing and maximising local benefits – and ensuring its contractors do the same”.

“In the following years, Sirius will consolidate and expand on its network of local suppliers, its local labour force, skills and education initiatives and community programmes”.

A previous economic impact assessment, focussed on future impacts, predicted that the project will deliver a £2.3 billion annual GDP contribution and £100 billion boost to the economy over 50 years,  as well as exports of £2.5 billion each year – reducing the UK’s trade deficit by 7%.  The low environmental impact project, involving the construction of two 1,600m mineshafts near Whitby, connected to a 23 mile transportation tunnel to a processing plant and port at Teesside, is expected to deliver 1,000 long-term, high-skilled, high wage jobs once fully operational.

“This project is a huge opportunity for the UK and sits at the heart of the Government’s Industrial Strategy agenda. The creation of thousands of jobs, increase in productivity and boost to exports will help power our economy at a critical time.”

“Sirius Minerals is a fantastic project for the people of the Tees Valley. After the devastating closure of the steelworks in 2015, new high-value jobs, training schemes enabling people to remain in the area, and large-scale supply chain opportunities are already proving to be having a huge impact on our area.”

Sirius expect to reach the polyhalite seam in 2021 and to be producing 10 million tonnes of fertiliser per annum by 2024.