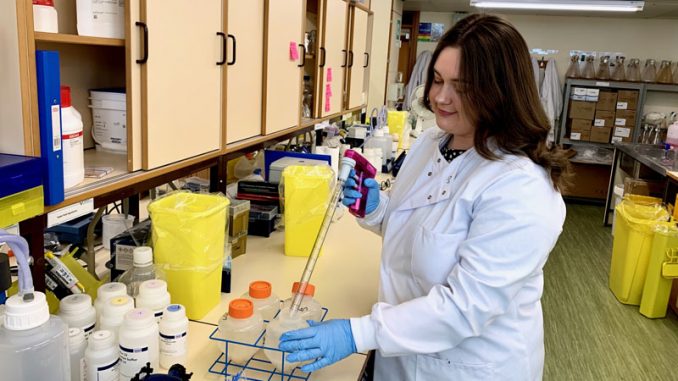 A Teesside company which is helping global pharmaceutical companies find a solution to the coronavirus pandemic has nearly tripled in size since March.

Absolute Antibody has taken on three new laboratories at the Wilton Centre, near Redcar, and recruited more than a dozen permanent and temporary members of staff.

“We’re involved in a significant number of projects all of which look to be giving promising data at the moment,” she said.

It works with companies based in dozens of countries and earlier this year received The Queen’s Award for Enterprise in International Trade.

Absolute Antibody’s expertise is particularly valuable to pharmaceutical businesses who are trying to develop treatments for COVID-19 rather than vaccines.

“There are a number of potential anti-bodies that can neutralise the virus – which is more up our street,”

“We’re helping people worldwide to take a look at that and see if we can get those anti-bodies into production for them.”

“One project has involved engineering an anti-body to look like the coronavirus cats catch.

“That allows people to understand how these diseases transfer between species.

“That ability to engineer anti-bodies has really been the key to our success,”

“Over the past few months we have had to be really adaptive and reactive to what’s been going on in the world.

“We’ve doubled capacity and probably on the way to tripling capacity.

Absolute Antibody was launched in 2012 in Oxford. Two years later it moved its manufacturing facility to The Wilton Centre, which last year also became its international headquarters.

Dr Bladen said that a major benefit of being based there was the opportunity to take on extra office or laboratories when, as highlighted in the last few months, more space was urgently required.

The centre’s accommodation manager Claire Morton said even though the site was a base for more than 60 businesses with 750 employees, the former headquarters of ICI still has room available:

“I think people are surprised about how big it is.

“For our occupiers – such as Absolute Antibody – that also provides peace of mind. They can concentrate on the job in hand rather than spending valuable time trying to find somewhere to move.”

The Wilton Centre is one of the biggest of a UK network of science parks which cover over 1.7m sq ft and are home to more than 200 businesses.