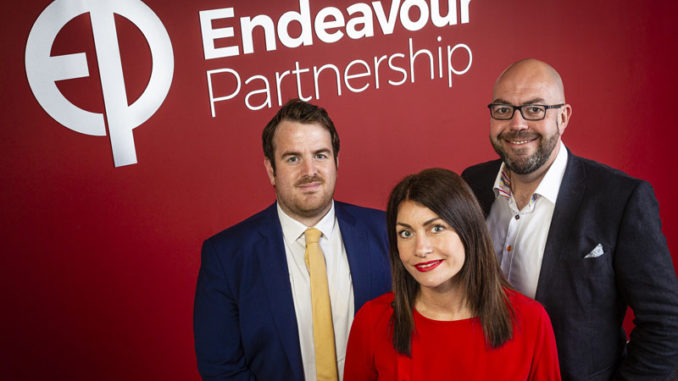 Stockton-based Endeavour Partnership is celebrating its twentieth anniversary this August and is marking the occasion with the appointment of two new partners.

Theresa Carling and Martin McKinnell join the 10-strong team of partners, led by the firm’s new managing partner, Lee Bramley who took over from Paul Bury, in April 2019.

“There is a real buzz about Endeavour, and I am delighted to be working with the most gifted commercial lawyers in the region as well as being made up to partner at this exciting time.”

Theresa joined Endeavour Partnership in 2018 and has over 15 years’ employment law experience, while Martin began his career with the firm in 2010 and was most recently a senior associate in the Corporate and Commercial team.

Endeavour Partnership is the only law firm on Teesside recommended by the prestigious Chambers and Partners Guide for its Corporate and Commercial, Commercial Property and Insolvency teams, as well as for a number of its staff. In addition, Endeavour Partnership is also recognised as one of the North East’s leading corporate and commercial practices in the Legal 500.

The firm is coming to the end of a 5-year plan which commenced in 2014 which set out various targets in relation to staff numbers and turnover, amongst other things, all of which have been attained.

The firm’s new Leadership Team now plan to work on a new business plan which will include further growth plans which will lead to further job creation.

Paul Bury was a founding partner of Endeavour Partnership in 1999.

Paul has retired as a partner but will continue as a consultant for the firm and intends to maintain and develop his involvement with Butterwick Hospice, The Prince’s Trust and other third sector organisations operating in the Tees Valley.

Lee Bramley has been appointed as Endeavour Partnership’s new managing partner, having been with the firm for over 17 years.

“Marking our 20th anniversary is a major milestone for Endeavour Partnership and testament to the incredible team at the firm. We’ve grown significantly over the past couple of years and will continue to do so, hence the appointment of new partners.”

Endeavour Partnership are embarking on their next five-year growth plan and looking to cement their position within the Teesside business landscape still further, as well as forging even closer links with the wider Teesside community and educational organisations with a view to providing future employment opportunities.