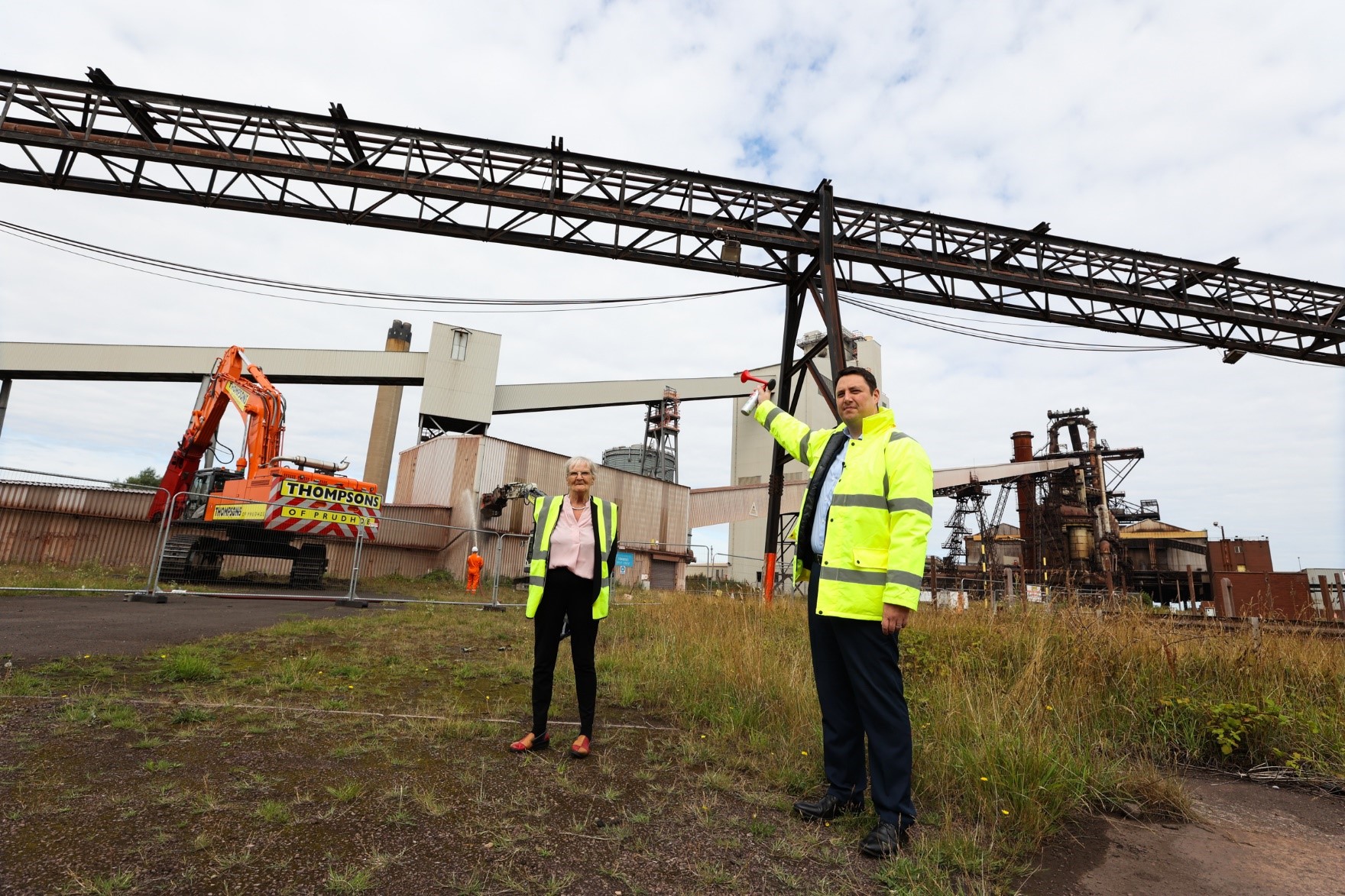 Tees Valley Mayor Ben Houchen has today (2 August) kick-started demolition of the historic Redcar Blast Furnace as work began to clear every one of the 11 major plants across the site to make it ready for future investment.

The first section of the iconic structure to be dismantled was, appropriately, the part that started the furnace – the main charge conveyor. This fed the blast furnace with the materials needed to produce iron.

Demolition has also continued on the Basic Oxygen Steelmaking (BOS) Plant with the demolition of the chimney stacks, with the first chimney pulled down today and all seven stacks set to be flattened by the end of the month.

Clearance work has also ramped up on key buildings at the South Bank and Redcar Coke Ovens and Sinter Plant so every corner of the site has demolitions under way.

The work commenced after Mayor Houchen pledged that every structure at the steelworks site would be down within a year, as part of the £113million programme which will see more than 1,000 people on site and around half a million tonnes of scrap recovered.

When complete, the project will free up 600 acres of land, paving the way for future investment on Teesworks, the UK’s largest Freeport. The site is already earmarked for the Net Zero Teesside Power carbon capture, utilisation and storage power plant, and GE Renewable Energy’s mammoth wind turbine blade manufacturing facility.

“Today marks the beginning of the end for the Redcar steelworks as we’ve known it.

“We’re accelerating our plans to make the land investor-ready as soon as possible and take advantage of all of the opportunities our status as a Freeport brings. This is one of the biggest, most complex and condensed demolition projects ever to take place in the UK and it’s happening right now on our doorstep.

“While the steelworks played a vital part in our communities, I’ve always been clear we need to look to the future, not the past, to create the good-quality, well-paid jobs that people across Teesside, Darlington and Hartlepool are crying out for. In the short term, this work is creating hundreds of critical construction jobs with local firms, and, in the long term, we’ll be welcoming thousands more as we make the site a clean growth and advanced manufacturing powerhouse.

“I know this is a highly emotive subject for many, and they should rest assured that the Teesworks Heritage Taskforce has been doing a fantastic job of making sure the site’s past will never be forgotten.

“We now need to crack on, to make sure the site is cleared by this time next year and nothing stands in the way of bringing new investment and a tsunami of jobs to the site once again.”

The Redcar Steelworks blast furnace has been part of the local skyline for decades and represents our region’s rich history of iron and steelmaking, which began in 1875. The blast furnace started production in 1979 and has played an important role in the lives of local people across the Tees Valley, although its recent.

It was first mothballed in 2010 before being restarted by SSI UK when they took over ownership from Tata Steel in 2012. Tragedy struck once again in 2015 when SSI entered liquidation, marking the end of iron and steelmaking on Teesside, with the loss of more than 2,000 jobs overnight. This led to the creation of the creation of the Mayoral Development Corporation in 2017, which was relaunched as Teesworks in 2020.

“We must always look to the future and grab with both hands opportunities to attract the industries and businesses that will provide the high-quality jobs our people deserve for generations to come, right here at Teesworks in Redcar and Cleveland. That means the site must be prepared and ready. Demolition work is part of that process and it is fantastic to see progress continuing.

“Of course, iron and steel making is in our blood here and there is a real sadness to see some of these iconic structures come down. That’s why it is so important that our industrial heritage is preserved and we have some fantastic projects celebrating the industry which means so much to us and we continue to be very proud of our steel industry which still remains vital to our economy.”

Just one week ago the independent Teesworks Heritage Taskforce, established by Mayor Houchen and chaired by Jacob Young MP and Kate Willard OBE, laid out its comprehensive plans to preserve the site for future generations and document its transformation.

The Taskforce has been working with plant managers, Historic England and former steelworkers to capture the site with ultra high-definition photography, videography and 3D modelling and to recover important historic artefacts from the site.

“I’m sure that for many Teessiders, myself included, this is a day of mixed feelings – optimism for the future mixed with a touch of nostalgia for the past.

“We’re all delighted that progress on the Teesworks site is continuing at pace. And that means that the old has to make way for the new.

“The conveyer to the blast furnace has been imprinted on the Redcar skyline for longer than I’ve been alive.

“But the truth is that our skyline, familiar as it is, represents our industrial past. And while Teesside will always remember where it came from, now is the time to look ahead to where we’re going.

“With huge projects such as Net Zero Teesside and companies like GE Renewables bringing jobs and prosperity to the region, it’s time for a new skyline – one that represents our cleaner, brighter industrial future.”