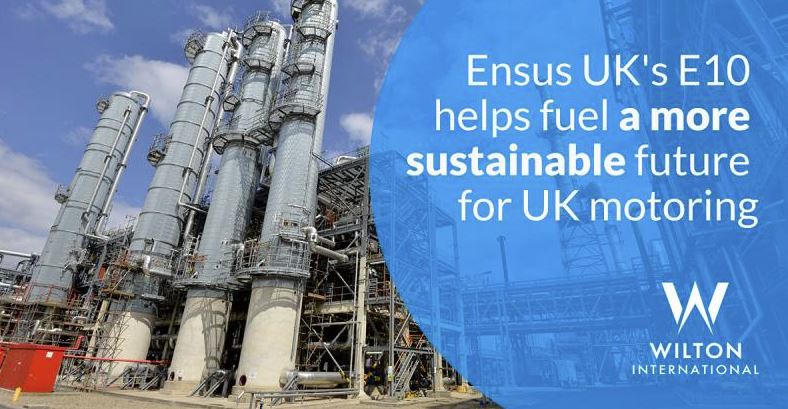 The move to E10 fuel means bioethanol producers like Wilton-based Ensus are at the forefront of future-proofing Britain’s transport system.

UK motorists have seen a move towards a more environmentally friendly way to travel with the introduction of E10 standard petrol in September 2021.

The ‘E’ in E10 petrol is ethanol, a form of alcohol which is blended with petrol to create a fuel that helps reduce CO2 emissions from vehicles, compared with standard petrol. E10 became the standard petrol on most British forecourts from September 2021, with Northern Ireland adopting the change in early 2022.

For bioethanol producers like Ensus, the change is an affirmation of sustainable fuel production methods that offer an alternative to the fast-depleting, pollution-heavy fossil fuels we have been dependent on. It’s also made the future of the business more secure, since demand for bioethanol from the fuel industry has effectively doubled.

“As one of the UK’s largest bioethanol providers, we’re very happy to see the move to E10 coming into play,”

“It makes sense ecologically and economically, and it supports the UK’s longer-term strategy on sustainable transport.”

E10 petrol is made of up to 10% bioethanol, double the amount of the previously standard E5 petrol (5% bioethanol). And while 5 percentage points might not seem like a huge increase, on a national scale it translates to a CO2 reduction of 750,000 tonnes a year – that’s the equivalent of taking all of the cars in North Yorkshire off the road, according to the UK government.

The update has brought the UK into line with many other countries in Europe and further afield, where E10 has been the standard for some time.

Bioethanol makes up around 80% of the world’s biofuel production. It’s a form of alcohol produced from the distillation and fermentation of sugar, wheat or maize, and is biodegradable and non-toxic. Bioethanol can be used in most modern petrol engines without modification, and unlike oil and gas, its production actively reduces CO2 levels, since the crops absorb CO2 as they grow.

Bioethanol production is a key contributor to our immediate response to climate change, since its raw material – in the case of Ensus, surplus animal feed wheat – is totally sustainable. In addition, its production process helps offset the CO2 emissions from burning fuel. It’s also boosting Britain’s energy security, helping to replace finite supplies of fossil fuels like coal, oil and natural gas, providing a source of greener employment for the country.

Food as well as fuel

Taking the sustainable process a step further, Ensus recaptures all of the CO2 generated during the bioethanol production process and uses it to supply up to 40% of the commercial CO2 used by the UK food and drinks industry, adding fizz to fizzy drinks and helping to extend the shelf-life of packaged food, which helps prevent food waste.

The dried residue of the wheat used in the distillation process is also put to good use, with further sustainability and land use benefits. When Ensus’ protein-enriched product is used as an animal feed, British farmers have no need to import protein additives such as soya meal, which can come from unsustainable sources.

“The UK is generally in surplus for animal feed grade wheat.”

“So our operations have given farmers another outlet for their product for more than a decade as well as a valuable additional source of income.”

More than 1 million tonnes of sustainably-grown wheat from UK farms is processed at the Ensus plant each year, generating:

Investing in the future at Wilton

The Ensus plant at Wilton International has been operational since 2010, and represents around £300 million worth of investment. The company, which is owned by CropEnergies, employs around 100 people. It also feeds into a wider supply chain of more than 2000 people in sectors such as agriculture, haulage, energy production and industrial storage.

Ensus recently established a new HQ at Wilton International, a £1.3 million investment in the long-term future of the business, which is set to pay off as green energy demand grows.

Teaming up to meet sustainability goals

Ensus is part of a thriving network of businesses and organisations, both at the Wilton International site and across Teesside, working alongside the government to reduce environmental impacts and hit the UK’s net zero carbon goals.

Between innovations in manufacturing that reduce waste and use more sustainable materials, and changes that use the Wilton site’s long-held expertise to repurpose and adapt technologies for greener applications, Ensus is building secure employment in the region while moving ever-closer to a sustainable industrial future.

To find out more about how Wilton International supports next-generation energy suppliers, download our data packs.