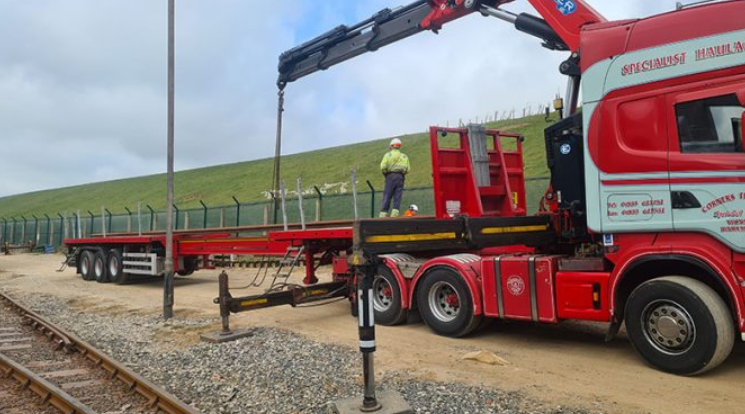 A donation of rails from ICL Boulby will help to ensure the future of Darlington Railway Preservation Society, an organisation which works to preserve the area’s rail heritage.

The rails, which were no longer needed at the Boulby site, will enable the Darlington Railway Preservation Society to continue its operations as it moves to a new base.

Society member Richard Snowdon spotted the rails, which had been removed from an old siding, when he was working at the Boulby site and asked if the society could acquire it.

The society has to move buildings as part of the plans for the development of the new Darlington Railway Heritage Quarter and, as a charity affected by a loss of revenue because of the Covid-19 pandemic, it could have been hit hard by a potentially high price tag for the rails needed on the new site.

With ICL Boulby agreeing to help, the rails have been moved to Darlington and will make an important contribution to securing the future of the society.

“The society is over the moon with the redundant railway lines. It will be used in the new project which is part of the council’s grand plan to redevelop the Railway Heritage Quarter in Darlington.

“As the shed we currently inhabit will be turned into the entrance to the Heritage Quarter, we are being moved into another building on site, which used to be a locomotive shed.”

He added that the council has to spend so much on the actual building that it cannot afford to pay for the railway line required for the society to continue, leaving the organisation needing to supply and fit all the rail on the new site

“The donation of the rail is a massive step for us and a really good start to the project,”

“We spent two days collecting the rail from the mine and I would like to say a massive ‘Thank you’ to all those involved for making it possible.”

“The railways have been at the heart of the North-East’s industrial heritage and, of course, play a big part in our operations, transporting our products from Boulby to our terminal at Teesport and then to farmers and growers across the world.

“When we were approached on behalf of the society, we were happy to help and wish it every success in the future.”