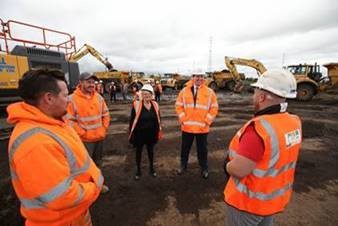 The South Tees Development Corporation has submitted game-changing plans for a 4.5million sq ft of state-of-the-art manufacturing space on the site of the former SSI steelworks in Redcar, which will create 9,000 jobs.

The huge scheme, led by Tees Valley Mayor Ben Houchen, would see more than 430 acres of land alongside the River Tees remediated and developed into a world-class manufacturing zone that could welcome its first tenants as soon as 2022.

The construction phase of the development would create 1,000 construction jobs during its eight-year build, with 9,000 more in permanent roles when complete, significantly boosting the regional economy for the long-term.

The transformational plans come just three months after Mayor Houchen succeeded in his bid to secure the former SSI steelworks through a successful Compulsory purchase Order.

“This is the biggest planning application in the North of England.

“We have worked tirelessly to take ownership of this site to allow us to get on with my plan for jobs, creating good quality high skilled local jobs for local workers.

“When I started CPO proceedings against SSI and the three Thai banks, I was clear that we owed it to the former steelworkers and their families to secure the site for the people of Teesside so that we could redevelop it and see jobs return to the side.

“This planning application represents a huge step forward in reaching this goal and represents a modest portion of the site, while creating many thousands of jobs, which shows why this site is so important – not just to Redcar and Cleveland but to the future success of our whole region.

“This game changing proposal represents by far the largest development announced to date for the former steelworks and will see a key part of the site brought back into meaningful use.

“To give this some scale, it is more than three times the size of the new Amazon fulfilment centre that opened in Darlington earlier this year.

“This application is another crucial step forward for my plan for jobs by delivering on the overall Masterplan, which we are now motoring ahead with.

“We’ve got the land, we’ve got the cash, the diggers are getting to work and we’re creating local jobs for local workers.”

“The sheer scale and ambition of this application is testament to the confidence and forward thinking of the Tees Valley Mayor and the South Tees Development Corporation.

“The fact this is coming so soon following the successful compulsory purchase order of the final parcels of land at the site just goes to show that not a second has been wasted in moving forward with these plans for the site.

“Ultimately this application means thousands of real jobs for local people. This isn’t just talk, this is happening – and at pace.

“And when you consider that this application, large as it is, only represents around a tenth of the total space available on the former steel works. It just goes to show the depth of our ambitions beyond this parcel of land.”

“This planning application has the potential to create over 9,000 highly skilled jobs for local people and achieve significant inward investment on the STDC site, which is vital for the future prosperity of the area and the region.

“The progress being made on site is great to see and especially important as we slowly emerge from the Coronavirus pandemic.

“There is still a long road ahead however this news is definitely another step in the right direction.”