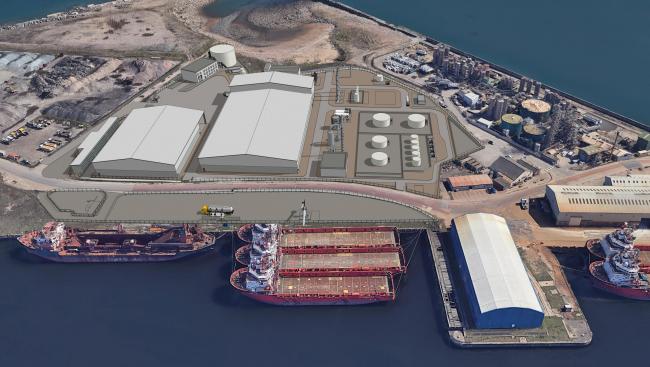 Plans to construct a world-leading recycling plant that will put the North East at the forefront of sustainable tyre recycling have been approved.

Wastefront AS, a Norwegian green energy company backed by energy giant Vitol, plans to construct the ‘UK’s greenest tyre recycling plant’ at Port of Sunderland, representing the largest ever investment at the North Sea hub.

Construction on the development is expected to begin this year, with company executives confident that the plant will be in commercial operation by 2024, creating around 100 skilled jobs.

The plant will convert end-of-life tyres (ELTs) into useful commodities, including biofuels and carbon black, which can then be reutilised in processes such as alternative fuel or raw materials for the production of new tyres or other products.

An estimated 29 million metric tonnes of vehicle tyres reach the end of their lifespan each year worldwide, representing an underreported but major cause of pollution due to their non-biodegradability. By converting tyre waste into usable commodities, Wastefront offsets carbon emissions, with the alternative end-destination being incineration. Due to the end-products being biofuels and raw materials to be used in new products, the plant will also have a strong alignment to the green economy.

The firm’s decision to invest in Port of Sunderland was influenced by co-founder and director, Christian A. Hvamstad, an alumnus of the University of Sunderland.

“Our ambition is to create a green global industrial platform for dealing with waste issues, and a crucial element of sustainable waste handling is to be able to do so locally. Wastefront’s first UK plant will represent a valuable contribution to a cleaner future by dealing with a specific waste problem, where end-of-life tyres no longer end up in landfills in overseas countries, but instead are converted into useful commodities that can be used within the region.”

“This is absolutely fantastic news not only for Sunderland, but the entire UK, and we can’t wait to see work start apace on the development of the site.

“Not only is this a fantastic story for the circular economy in terms of waste pollution, but it is also a fantastic circular economy success story for the city, demonstrating how the success of the University and recent developments such as the expansion of Port of Sunderland and the International Advanced Manufacturing Park are helping establish an ecosystem that nurtures and retains the best talent, driving innovation and attracting investors from across the globe to the city, and Wastefront is a perfect example of this.”

Since unveiling plans for the recycling plant in August 2020, Wastefront has secured a decisive 10-year supply deal with energy giant Vitol, which will see the world’s largest independent oil trader purchase all of the Sunderland plant’s available liquid hydrocarbons.

“As a graduate of the University of Sunderland and a former resident of the city, I have seen with my own eyes the vast potential it has to capitalise on the economic opportunities that the Net Zero agenda will generate.

“From the region’s world-class universities to its skilled workforce, I’m sure it comes as no real surprise to those familiar with the area that it is currently attracting investment from industry heavyweights such as Nissan and Envision and we’re very much looking forward to joining them.”