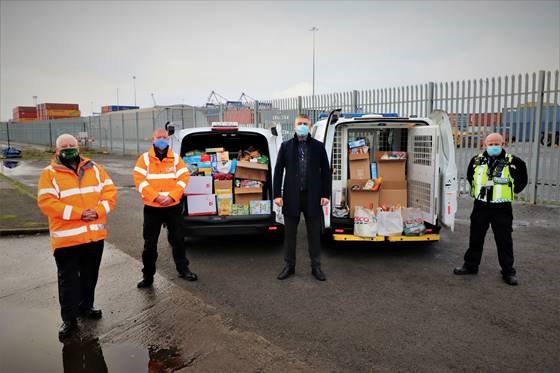 Kind-hearted staff from PD Ports’ sites at Teesport, Hartlepool, Billingham and Middlesbrough have taken action to bring some Christmas cheer to Teesside’s most vulnerable families.

PD Ports regularly donates to local food banks in the area but, after a particularly difficult 2020, one staff member was so moved by the stories of hardship that he organised his own collection.

Neal Armstrong, Head of Police, Security and Resilience at PD Ports, co-ordinated a four-week appeal across all departments – and his colleagues didn’t let him down.

The produce collected was delivered to the Trussell Trust Middlesbrough Foodbank and Whale Hill Community Centre Foodbank in Eston, where it was gratefully received.

In addition to the food donations, PD Ports also donated £1,000 to the Trussell Trust, who provide emergency food and support to those in poverty, which will give a much-needed boost to the wider local community this Christmas time.

“From the moment I communicated the idea of collecting donations for our local foodbanks, I immediately had people wanting to contribute and support in any way that they could.”

“I think everyone at PD Ports knows how hard it is financially for a lot of people in our communities, and with added pressures of Christmas and the Covid-19 pandemic affecting many people’s ability to work at the moment, there is a real sense of camaraderie.

“People just want to help where they can.

“There’s lot of charitable work that goes on every day right across the PD Ports business, but people have still been so generous and made the effort to support this idea. Hopefully the donations will make a difference to families in need.”

Speaking to Lee-anne Southon, Office and Warehouse Coordinator from Middlesbrough Foodbank, she said:

“Middlesbrough Foodbank wouldn’t be able to serve the people in Middlesbrough without food and monetary donations throughout the year.

“These generous donations will make a huge difference in the lives of many in the community, and restores hope.”

“As a Middlesbrough-headquartered company, it’s fantastic to see PD Ports showing ethical leadership once again. At this time of year especially – and at the end of this year in particular – it’s important we all look out for those less fortunate than ourselves.

“Well done to PD Ports for the generosity shown by the company and its staff.”