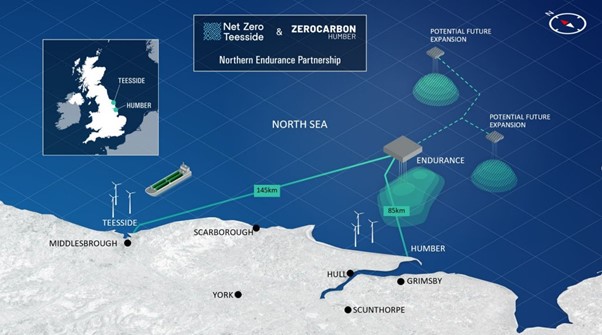 Bids from three industrial consortia that will link together to deliver deep reductions in industrial emissions on the east coast of England have been awarded funding as part of the Industrial Decarbonisation Challenge under the UK Research and Innovation’s Industrial Strategy Challenge Fund (ISCF).

The three bids amount to £229 million in private and public funding, with industry contributing two-thirds of the total, and will support the next stage in development of the three projects.

The Northern Endurance Partnership (NEP) will accelerate the development of an offshore pipeline network and geological storage in the UK Southern North Sea.

In the Humber, the Zero Carbon Humber (ZCH) partnership will develop H2H Saltend, one of the world’s first at-scale low carbon hydrogen production plants, and a CO2 and hydrogen pipeline network connecting to industrial sites and gas and biomass power stations throughout the Humber, enabling them to capture their CO2 emissions and/or to switch to low carbon hydrogen.

NZT and ZCH are at-scale projects that will kick-start decarbonisation of industry and power in two of the UK’s largest industrial clusters. Both projects aim to be commissioned by 2026 with realistic pathways to achieve net zero through a combination of carbon capture and hydrogen. If successful, the combined projects will support decarbonisation of nearly 50% of the UK’s industrial cluster emissions.

“While reaching our climate targets will require extensive change across our economy, we must do so in a way that protects jobs, creates new industries and attracts inward investment – without pushing emissions and business abroad.

“Ahead of COP26, the UK is showing the world how we can cut emissions, create jobs and unleash private investment and economic growth. Today’s strategy builds on this winning formula as we transition low carbon and renewable energy sources, while supporting the competitiveness of Britain’s industrial base.

“I am pleased to welcome the Phase 2 funding the projects have received through the ISCF, which will help to accelerate key elements of onshore and offshore CCUS infrastructure on the east coast of England.

“This support for CCUS in the UK is critical to enabling projects such as NEP, NZT and ZCH to enter Front-End Engineering Design (FEED), a crucial step forward as we look to develop the world’s first decarbonised industrial cluster by 2030.

“Public funding demonstrates Government commitment and increased ambition to establish the CCUS industry outlined in the recent Ten Point Plan and, along with clear Government policy, which is currently being developed, will unlock significant further investment from the private sector.”

Grete Tveit, Senior Vice President for Low Carbon Solutions at Equinor, which is a partner in ZCH, NZT and NEP, said:

“These awards are great news for the UK. The Humber and Teesside make up nearly half of UK’s industrial emissions so, to reach net zero, there is enormous value in tackling emissions at both clusters together.

“Rolling out carbon capture use & storage and hydrogen across the UK’s industrial clusters supports the Government’s aims for a green recovery and to level up by safeguarding and creating many high-skilled jobs, and will establish the UK as a world leader in hydrogen and low carbon technologies.

“As the UK’s leading energy provider, we will continue to work with our partners to progress our projects to final investment decision, engage locally and nationally to make this happen.”

“These awards represent an important milestone as we look to decarbonise the UK’s largest industrial heartland and build a globally competitive platform for economic growth in the North of England.

“Teesside and the Humber offer the potential for a unique mix of technologies and scale to achieve net zero, delivering significant value for money.

“National Grid will use our knowledge and experience of gas and electricity transmission infrastructure, and our capabilities developed on previous CCS projects, to deliver the infrastructure required to enable industry to achieve deep decarbonisation.”

The Industrial Decarbonisation Challenge, funded as part of the ISCF, is the Government’s flagship challenge-led innovation programme, run through UK Research and Innovation (UKRI), a non-departmental public body sponsored by the Department for Business, Energy and Industrial Strategy (BEIS).

Around £2.6bn of public money has already been invested through the programme in projects from all sectors to tackle big societal and industrial challenges of today.